Hybrid IT: Our Customers’ Views

Cloud has been the buzzword of choice in the IT industry for the past decade or so. During that time, conversations on cloud computing invariably leant towards cost, security, data sovereignty, choosing the right supplier and selecting the right cloud computing model. Fast forward to today, and many cloud related conversations tend to focus on hybrid or multi-cloud models. Recent stats from the 2015 Rightscale report show that 93% of organisations said they use some form of cloud service, with the majority using private and public cloud but only 5% using just private cloud in isolation. Interestingly, this suggests that, if organisations are going to use cloud, they will dip their toe in the water initially with public and then expand outwards, not the other way around. 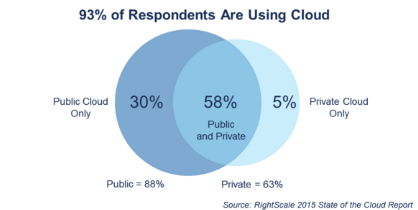 This finding supports the view from Pulsant’s customer survey that hybrid cloud is still, according to Gartner’s hypecycle, stuck in the trough of disillusionment. The prevailing attitude towards cloud computing now is on fully understanding and reaping its benefits, as opposed to looking at its adoption. Maybe once organisations have a clearer understanding of how cloud interrelates with their broader IT strategy, we will see cloud accelerating out of the trough of disillusionment.

1. While concerns remain around security and related issues like data privacy and data sovereignty, there is also a greater understanding of the risks associated with cloud adoption. Balancing identified risks with business benefits and understanding how these risks can be mitigated is a key factor in cloud adoption.

2. The growth of colocation adoption is slowing while more and more organisations are adopting cloud, causing cloud adoption figures to rise tremendously.

3. Cloud is not an aspirational product and businesses are turning to its services to gain actual advantage and reap its benefits.

Taking the analyst’s view, IDC forecasts that cloud IT infrastructure spending will increase by a compound annual growth rate (CAGR) of 15.1%, reaching $53.1 billion in 2016. While Cloud Industry Forum shows that 70% of respondents already using cloud expect to increase adoption with the next year.

The analysts’ forecasts were reinforced by Pulsant’s research which identified that of the organisations surveyed, 83% of customers said they are likely to increase cloud use in the future. Today, 15% of total IT budget of those surveyed is spent on cloud, whereas 22% is spent colocation. Having spent time with customers and prospects, I would argue that declared cloud spend would be greater if you were to include shadow IT. The very name ‘shadow IT’ lends itself to something bad that should be stamped out. Personally, I would take Gartner VP Simon Mingay’s view that organisations should recognise the digital skills of employees in order to innovate and get better value from IT investments. A subject for a later blog as weighing up the rewards against risk and compliance would be key.

Cloud or Colocation (or both)?

Pulsant’s survey sought to answer this question from both a business and industry viewpoint. One survey respondent stated that: “Security is the biggest issue. A lot of cloud platforms give assurances about security… but some of our customers are very wary of going down that route.” Another cited cost management and the lack of in-house skills as barriers to adoption. What the survey did highlight is that, regardless of whether the question is approached from an industry perspective or business perspective, the outcome is surprisingly similar.

The Importance of Owning Assets

This is a heading I didn’t expect to be discussing in a summary of Pulsant’s customer survey! The result was actually evenly split – with 47% of respondents indicating owning assets isn’t important and 53% indicating it is. Some CIOs have a technical background and place strong emphasis on owning their IT assets, yet others can’t imagine why they would need to own their IT assets. What this demonstrates is the challenge today’s CIOs have to remain relevant to the business. It is the responsibility of the CIO to build the most effective IT organisation that will deliver efficiencies and add value to their stakeholders. If that means owning IT assets then so be it, but it should be the strategic direction of the organisation that drives this, not the technical capabilities of the CIO or their desire to touch and feel a piece of tin.

With the different attitudes towards cloud, its continued adoption and the maintained status quo of colocation, it is fair to assume that the majority of organisations will at some point fall squarely in the middle.
Many indicators say that the future is, indeed, a hybrid cloud or multi-cloud strategy. While cloud and colocation will continue to co-exist, our survey reveals that organisations are getting more comfortable in identifying and exploiting the strengths of each IT sourcing route.

Hybrid has arrived, but service, support and management are key outcomes for customers to make it a viable way of delivering IT services. Some firms will want to run instances in different jurisdictions for data sovereignty reasons. Others might fear being locked into a single provider, or use multiple providers to combat latency issues. Some might crave redundancy enough to straddle multiple IaaS providers. Ultimately, as Gordan Davey, UK cloud strategy director at Dell, points out, the driver for multi-cloud environments is that different providers can often provide optimal services for specific workloads. It should be the attributes of the workload that dictate the strategy.

More and more customers are taking for granted the fact that the technology works. Of seemingly greater importance is the assurance that the solution meets their requirements and helps deliver business outcomes. At the same time customers are looking for a partner who ensures the availability and reliability of the solution, delivers outstanding support and frees up the organisation and its IT team to focus on business issues and delivery of objectives.

The full Hybrid IT Survey report can be downloaded here.